If robots and humans fell in love, what kind of future is ahead?
Is there love between life and non-life?
Furthermore, is there birth of hybrid presence between humans and robots as children?

With faith that love exceeds everything, using virtual reality system and a humanoid robot, we imagine and express the future that humans can romance, touch and leave offspring with robots, and “destroy” current common sense.

The authors made a work that adults return to the fetus before. However, after making the work, we strongly wished to be reborn as a complete existence. Humans are incomplete existence and their intelligence and body are likely to be overtaken by artificial intelligence and robots. If the future that humans can leave offspring with robots comes, I thought that a perfect existence both as physically and intelligently will be born, therefore I made this work.

This work uses the virtual reality system and the actual robot, and it is a work in which the virtual world and the real world are linked. The person who experiences this work first receives a confession of love from the robot within the VR. After that, it becomes sperm and advances toward the robot egg in VR world, and at the same time it reaches the egg fertilization which is carried out by wrapping it in the balloon and formed the ovum in the real world. In terms of acoustics, not only the voice of the robot’s utterance and navigation, but also the sound of amniotic fluid and the sound of the heart which was sent to the background, express an euphoria towards fertilization. When the person who experiences this work remove HMD goggles after fertilization, a child robot actually appears as a hybrid existence born between the human and the robot, and he/she can experience walking with the child robot holding hands. It became a work with strong message by increasing the reality of the experience by combining the VR world experience and the real experience that touches the robot in the real world. 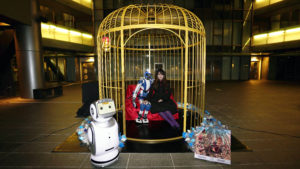